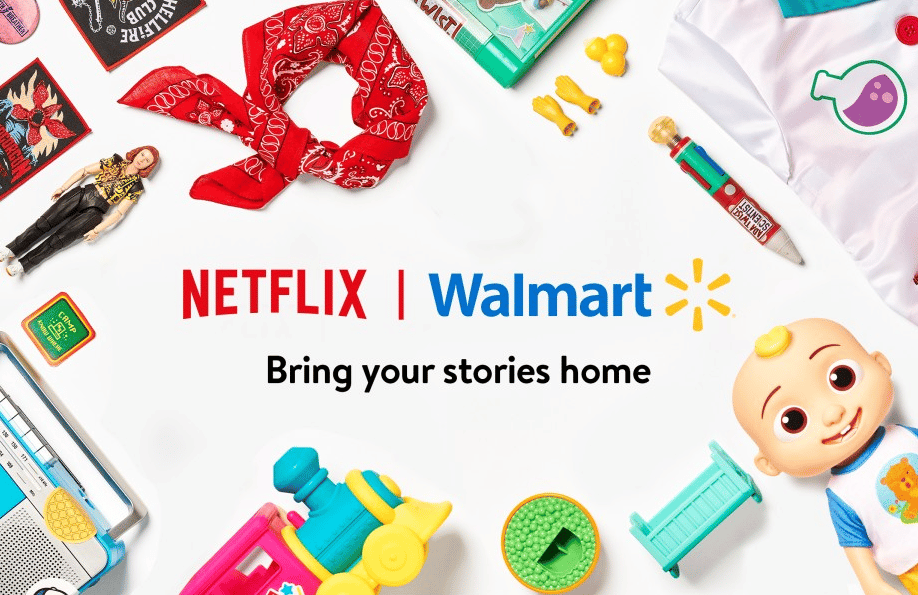 Will this complement or compete with Netflix.shop?

Four months after launching their own online store, Netflix has partnered with Walmart to be their new retail hub. This hub will be a place for Netflix to showcase exclusive items and innovative experiences that bring Netflix shows to life, including everything from music and fashion to toys and games. In an October 11, 2021 blog post, Jeff Evans, executive vice president of entertainment, toys and seasonal for Walmart U.S. shared the news.

“At Walmart, we recognize the importance of bringing those trends directly to our customers and fast. That’s why I’m excited to announce the launch of the new Netflix Hub at Walmart, which establishes Walmart as the Netflix destination for family entertainment experiences,” Evans said.

“Through this new partnership, Walmart will not only offer products that bring the imagination of Netflix creators into reality, but Walmart customers and Netflix superfans will also find a new, exciting entertainment destination. The Netflix Hub brings together some of its most popular shows in its first digital storefront with a national retailer, and we’re proud to partner with them on this new adventure that will let our customers dive even deeper into their favorite stories and characters,” added Evans.

Among the shows whose merchandise will be featured are “Stranger Things,” “Nailed It!,” “CoComelon” and a new show, “Ada Twist Scientist.”

Here are a few samples of items that shoppers will be able to purchase from the Netflix retail hub at Walmart.com in the months to come:

Squid Game t-shirts in a variety of styles and prices

In addition to the shows named above, Walmart features products from other popular Netflix programs including “Gabby’s Dollhouse,” “Cobra Kai,” “Queer Eye” and “Over the Moon.”

Different from Netflix’s own online store

In June, Netflix launched its own online store, Netflix.shop, where fans can buy merch inspired by their favorite characters and shows. At launch, the Netflix store, powered by Shopify, features merch from Hypland, BEAMS, Nathalie Nguyen and Kristopher Kites including t-shirts and hoodies, jewelry, caps, collectibles and more.

“We love it when great stories transcend screens and become part of people’s lives. We’re always looking at how we can extend the world of our stories for fans, from apparel and toys to immersive events and games. And it’s why today we’re launching Netflix.shop as an exciting new destination combining curated products and rich storytelling in a uniquely Netflix shopping experience,” said Josh Simon, vice president of consumer products, for Netflix in a June 10, 2021 blog post.

Simon said that the Netflix online shop will feature exclusive limited editions of curated high-quality apparel and lifestyle products that are tied to their shows and brands. This month, the store features streetwear and action figures from two Netflix anime series Yasuke and Eden, along with limited-edition apparel and décor inspired by Lupin in collaboration with Musée du Louvre.

Looking at the two online stores reveals that the merchandise in each is very different. The Netflix Hub on the Walmart site appears to be family friendly. The merchandise at Netflix.shop is a little edgier and more exclusive, featuring collectors’ items, designer brands and items more appropriate for an older audience.

Over the course of the last year, Netflix has made other moves to diversify its revenue streams, including expansion into podcasting, video games and merchandise. Considering that membership growth is slowing, it is a smart play on the part of Netflix to explore other revenue streams and partnerships. What is a little harder to understand is Netflix’s use of the term “exclusive” in its own store and now in the Netflix Hub. The products are clearly different and geared toward different audiences, but it makes you wonder if they won’t merge the Netflix.shop store with Walmart at some point. It doesn’t make sense to have two exclusive shops, particularly when Walmart has huge reach that Netflix could benefit from.

The key difference seems to be revenue and who gets what. In the case of the Walmart hub, Netflix and Walmart would share revenue and there would also be licensing and product costs. In the Netflix store, Netflix is paying licensing fees and probably sharing revenue with the designers and creators of their merchandise.